Menu
< to the consumer area

Ever heard of Seal & Trace? No? Do you sometimes travel by plane? With Seal & Trace you will be able to trace your luggage. Read all about it… 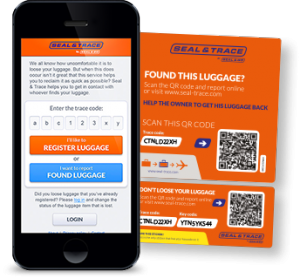 Complementary service
A couple of years ago we developed a service tool that helps travellers ‘trace’ their lost luggage. We called it Seal & Trace. This helpful and appreciated complementary service was offered for the first time in 2014 at our Seal & go location Amsterdam Airport Schiphol. The unique service tool became a great success. After launching the concept at Amsterdam Airport we introduced it at the Seal & Go location Hamad International Airport, Qatar. Since 2015 we also offer Seal & Trace in Oman and at our recently opened location HATO international airport Curacao.

Seal and make traceable
Our Seal & Go employees attach a sticker with a unique trace code onto the sealing. The owner of the luggage also gets another code, called a key-code, which can only be found on the back of his receipt and corresponds with the trace code. With the key-code the owner of the sealed luggage can register his luggage online. The registration of a sealed piece of luggage can be done prior to departure, but it is also possible to register the luggage when the owner found out it’s missing. Once registered online, the luggage will be traceable.

Get in touch
When somebody finds a piece of sealed luggage with a Seal & Trace sticker, they can scan the QR code and leave a message for its owner. The Seal & Trace portal will send an automated message to the cell phone or e-mail address of the owner of the luggage. With the provided information the owner can get in touch with the finder and make arrangements to pick up the lost luggage.